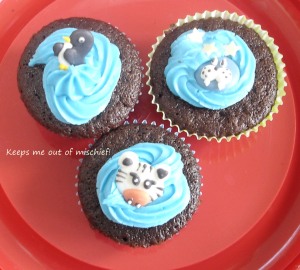 My immediate answer to the above question would be a big fat NO!  Unfortunately, when you’re 6, all cupcakes must have blue icing and this must be smeared over yourself and every surface in the kitchen; fortunately I managed to attack him with a wipe before the rest of the house got covered too!

Today I’ve been entertaining my nephew.  He often comes round to bake and normally I make cookies or gingerbread biscuits with him as he loves using the cutters to make the different shapes.  Today, however, he wanted to make cupcakes ‘like you make for birthdays’.  Now, I often make cupcakes for family birthdays and gatherings, but never, I repeat, never, have I made cupcakes with blue icing.  It’s just wrong.  It doesn’t look very appealing or appetising and just seems to be wrong to put on top of a gorgeous chocolate cupcake.  He decided that we could make them look better by using some decorations that he managed to find in the baking cupboard.

So we set to work making the cupcakes, with me finding the ingredients from my standby chocolate cupcake recipe and him stirring the mixture and chucking a lot of it over the sides, how they ever ended up tasting like cakes is beyond me!  We put them in the oven, licked the bowl and went to make little videos that showed his transformer flying around, gotta do something to stop him opening the oven!

Then we made the icing and I, perhaps foolishly, let him pour the food colouring in.  He was actually quite restrained and the icing was actually quite a nice shade. He helped me to fill the icing bag (far easier than doing it yourself) and helped me to squeeze it over the cakes.  This caused  slight problem when the combination of two hands caused the nozzle to come shooting out of the piping bag followed by lots of icing.  The result wasn’t altogether pretty, but he decided that that would be a good cake for his brother!  As you can see, it’s not the prettiest thing!

He then decorated the cakes using the sugarcraft animal faces and some chocolate stars.  They actually look pretty good and tasted rather good too.  I sent him home happy with his box of cakes and blue icing smeared all over his face!

2 thoughts on “Can a cupcake look good with blue icing?”