My family have been round for dinner this evening and have eaten up all the cake in the house from where I’d been experimenting with recipes.  This means that the cake dome is bare, something that doesn’t happen all that often!  An empty cake dome requires filling with goodies, but what to make? 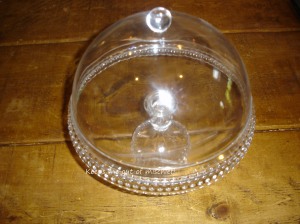 We’re going to be spending time with our nephews this week so we need to make something they will like and flapjack is a good standby.  I like to put fruit in my flapjack, but my nephews have pronounced it disgusting so it needed to be hidden fruit that they couldn’t spot until it’s too late!  I was looking through the cupboards when my husband made a suggestion.

My husband doesn’t spend much time in the kitchen, he likes what appears from it and understands that it needs clearing up every so often but doesn’t like to cook.  He knows what he likes to eat, he’s generally not a fussy chap, but he doesn’t tend to make suggestions when I’m cooking.  This evening was an exception.  Chocolate chips he pronounced.  Well these would certainly appeal to the kids, I thought.  So off I went, adding the ingredients into the saucepan, and feeling a slight sense of shock that my husband had suggested a recipe idea.

Of course the chocolate chips melted and the mixture looked a rather strange colour.  No matter, I chucked it in the oven and left it for 30 minutes.  The result was surprisingly good, if slightly chewy, flapjack!

Put the butter, honey and golden syrup together in a pan and melt over a low heat.  Add the oats, apple and chocolate chips and mix well until the mixture is well combined.  Pour into the baking tray and place in the oven for 30 minutes or until golden brown on the top.