The other day I got myself slightly over-excited when I bought my first piping bag – it seems that the power of advertising had managed to convince me that when I lifted up the piping bag I would turn into some kind of cake decorating genius and produce beautiful cakes in the blink of an eye!  Alas, it wasn’t meant to be and my first attempt at piping was a dismal failure – they tasted good, but the frosting was too runny to keep its shape.

Ho-hum, another day, another attempt – I’m not one for giving up, I will persevere, I’m stubborn like that .  I can’t just keep making cupcakes though as, even though my husband doesn’t mind eating them,  my waistline won’t thank me for it!  So I had to wait until we had someone coming round so that I could inflict my next attempt on them!   So it’s Easter Sunday morning and the family are coming around later for a barbecue. I’m hoping the sun will come round too, it’s been absolutely beautiful here for the past week, but today it has clouded over – boo-hiss. 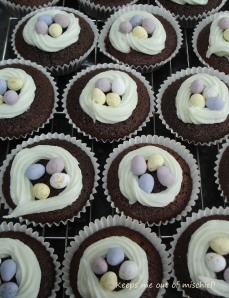 Much more successful – the frosting kept its shape and was far easier to pipe onto the cupcakes.  I used the same cupcake recipe as before but put it in small cupcake cases so this time it made 30 instead of 16.  I’ve frozen a batch to see how well they freeze as I didn’t want the temptation of 30 cupcakes staring at me saying ‘eat me!’.  For the frosting I used 60g cream cheese, 240g icing sugar, 5ml peppermint essence and a couple of drops of green food colouring.  I even managed to do some big fancy swirls!  Getting better, practice makes perfect!

3 thoughts on “Easter Cupcakes – more success with the frosting this time!”