As a child I liked nothing more than building a den in the holidays.  Most of them consisted of a blanket over the dining room table or over the clothes horse at my gran’s house; normally they had to be inside due to the great British weather!  Sometimes the den would be created in the garden with sticks and a groundsheet, I never built anything this exciting!

This den was created as part of a project I did at school where we made a series of platonic solids from garden canes on the school field. A platonic solid is a 3D shape made from identically shaped faces.

We noticed as we were building the icosahedron that if we didn’t put the final five pieces and left it with a large pentagonal shaped base rather than a triangular base on it would make a great den.

We secured the garden cane with masking tape as we built it but it would be better to use duct tape if you want it to last longer.  If you’re just making it for inside the house you could use rolled up newspaper to form your canes.  The version in the picture above was made with forty-five 4″ garden canes.

The instructions below are made using drinking straws – all the children made their own mini version to take home to share with their parents.

Make 15 equilateral triangles.  Lay five out next to each other and secure together.  There will appear to be a gap until you attach the last triangles together and it ‘pops’ up.

Attach five more triangles around the edge as shown in green. The middle should be popping up the green triangles should lie flat. 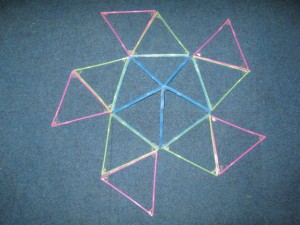 Attach five more as shown in pink.The middle should be popping up, the green and pink triangles should be lying flat.  Don’t you just love multicoloured packs of drinking straws! 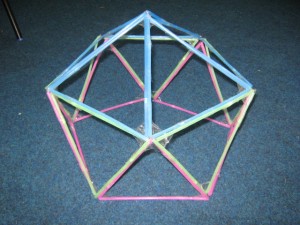 Now, this is the potentially tricky bit, do it step by step and you’ll be fine!  Attach a pink triangle to the green one next to it.  The shape should come together an form the den shape.   You could decorate your den by winding string/ wool across the triangular panels to make it feel more enclosed.  Have fun!

2 thoughts on “Building a den for the garden and a maths lesson!”